‘March with Midwives’ is a grassroots movement achieving so much for midwives, pregnant people, and their partners. This goal is to raise awareness of the urgent maternity crisis in the UK with the public, the press, and within government.

With around 12,000 people having attended the November vigils last year and having gained over 52,000 members on their Facebook page in just 6 months, the momentum behind the movement shows just how essential it is that the maternity crisis is addressed before it’s too late.

The Real Birth Company interviewed Maddie McMahon, doula and breastfeeding counsellor of nearly 20 years, author of two books, ‘Why Doulas Matter’ and ‘Why Mothering Matters’ and Founder of ‘Developing Doulas’. She is a key creator of the ‘March with Midwives’ movement. 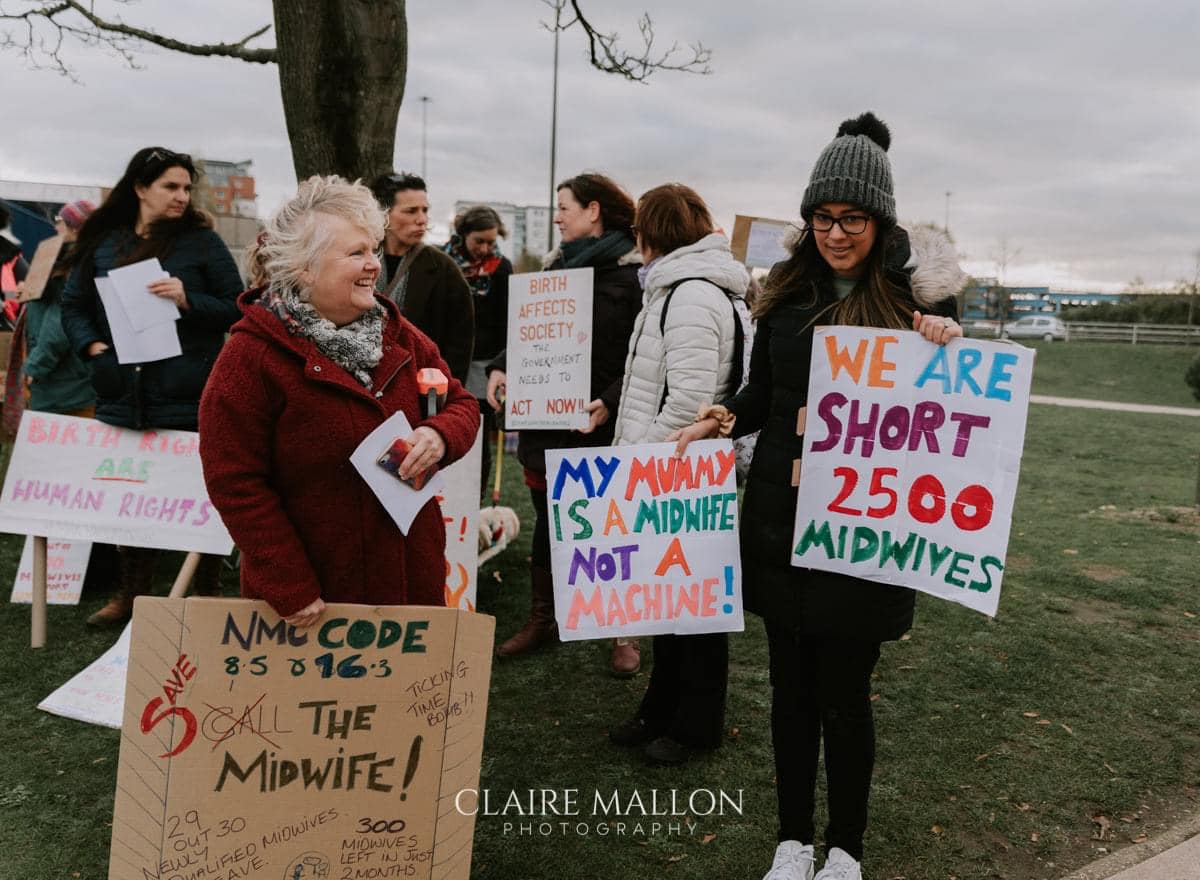 Maddie explains that doulas have a unique vantage point when working with people navigating through the maternity care system, “we see through their eyes what is wrong with that system”.

She described how in the current servicewomen are unable to build a relationship with their known midwife, despite this being the evidence-based gold standard of care. She described patients receiving conflicting advice from multiple different practitioners, and stories of patients being coerced, manipulated and not feeling listened to.

She goes on to say “it can feel very traumatic to be pregnant and that’s not new. It’s something that we have experienced for many, many years and obviously, in the 20 years that I’ve been doing this, intervention rates have been going up exponentially.

When I started birth work most of my clients were able to choose the kind of birth that they wanted and now it feels like absolutely everybody has to put up with the cascades of unwanted intervention”.

Induction is just one form of intervention which has increased over recent years. Induction is the artificial stimulation of uterine contractions to promote the onset of labour. According to NHS Maternity Statistics (2020-2021) for England, since 2005-2006, induction rates have risen from 20.5% to 34.4%.

It’s important to recognise that the process of induction isn’t always simple or straight forward. It usually requires and inpatient admission, medications, additional monitoring and assessments, as well as a longer stay in hospital and a greater requirement for one-to-one care. The dramatic 14% rise in induction rates all adds to the stress on the maternity system. All this takes up precise staff time and resources which are already too short to go around.

The sharp increase in induction rates has been used in an attempt to reduce stillbirth rates, however the results are questionable as shown in Provisional births in England and Wales: 2021. The monthly stillbirth rates were higher than the five-year average in 7 of the 12 months in 2021.

There is no doubt that the Covid-19 pandemic has also placed immense pressure to the already strained system.

Maddie explains that the pressures staff have been, and continue to be exposed to, are spiralling ‘out of control’.

Having worked as a birth activist for a long time, and worked on Hospital Committees, Maternity Voices Partnership Committees for many years, Maddie has witnessed from the inside the pressures that staff are facing.

She believes that pressures got to a point last year that were ‘untenable’.

She goes on to warn that the knock-on effects of these immense pressures, are that staff are buckling under the weight of it all.

“We know staff are leaving at massive rates, they are haemorrhaging out of the NHS, not just in maternity care.” 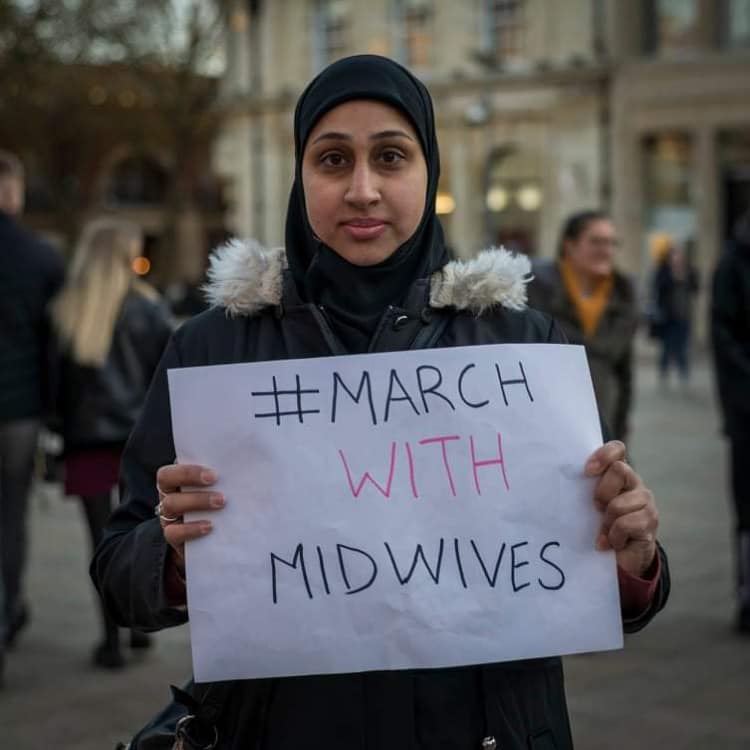 According to the most recent NHS Workforce Statistics of 2021, there was an overall loss of -411 midwives from November 2020 – November 2021.

Last year the Royal College of Midwives (RCM) published the results of its annual member experiences of work survey.

The stark results revealed the true extent of the maternity staffing crisis and low morale within the profession, coming direct from the mouths of those that work within it.

Key points of the survey are shown below:

Worryingly, the highest levels of dissatisfaction come from those midwives who have spent 5 years or less working within the NHS.

Despite the Government’s £95million pledge to recruit and train upwards of 1200 midwives, the problem lies with retention.

RCM Chief Executive, Gill Walton, commented on the problem, “It is of deep concern that we’re only seeing an increase of about one NHS midwife for every 30 or so newly-qualified midwives graduating from our universities. It’s not that new midwives aren’t getting jobs, they are. The problem is that so many existing midwives are leaving the service that the two things almost cancel each other out”.

The maternity service really is at crisis point. Maddie McMahon recalls her experience of clients being left alone without the emotional support of their partners or doula, women being told that their baby had died without the support of the other parent with them, women being required to have an intimate examination before their partner was allowed to join them in labour, and midwives feeling suicidal or even attempting to take their own lives. She said when she witnessed this, ‘something broke inside’.

Sadly, Maddie’s feelings were not isolated. That same feeling was mirrored by birth workers all over the country, and March with Midwives movement came as a result.

What is March With Midwives?

“March With Midwives is an organic, spontaneous outcry of pain. We’ve all got to the end of our tethers”.

March with Midwives is a grassroots movement set up by maternity care workers and their families. It began on social media, following the publication of the above RCM survey. The March invited members of the public to walk side by side with maternity care workers in marches up and down the country, in protests demanding better funding, staffing and working conditions. 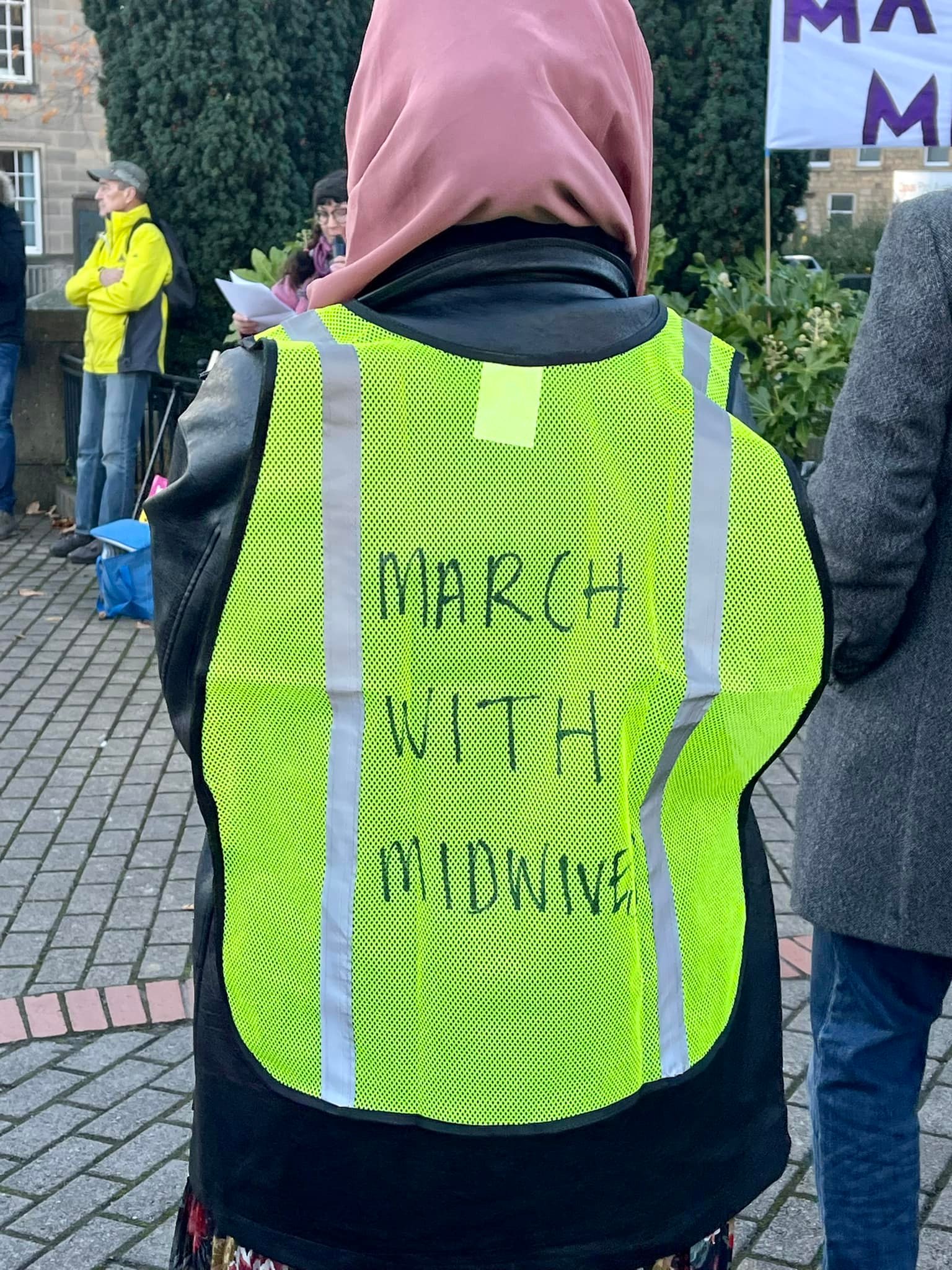 How was the March With Midwives movement born?

When asked how the March With Midwives movement came about, Maddie recalled a conversation with her fellow doulas, where the idea of organising the march took shape.

Fellow doula, Paula Cleary, had previously organised a march when she launched a local campaign to support the homebirth service in her local area after it had been suspended. She’d garnered support, set up a petition and had a demonstration locally and her efforts managed to effect change.

With a successful track record of something similar previously, it was decided a march would be the way forward. “We all said…we need to do this countrywide, and we need to give a voice to everybody”.

The group discussed how the working conditions of midwives were so abysmal and how that affected people’s birthing conditions, and they realised that actually, everything is connected.

You can’t just say “This is wrong with maternity care, this is what’s happening to mothers”, without addressing what’s happening to midwives. That’s why we decided we were going to call it “March with Midwives” with the understanding that parents need to march alongside the people who are providing that care, because we are all victims of the same toxic system.

Why is it important?

Midwives, mothers, parents, families and the wider community are all being affected by the crisis in maternity care. This isn’t just about midwives. It’s about everyone who is, or has been supported by them and the work that they do, in a direct, or indirect way.

Midwives and maternity care workers are at the forefront of life. Birth is the foundation for life, and if we can’t get that right, it has the potential to have a profound and lasting impact on the health and happiness of future generations.

The March With Midwives Momentum

How many vigils have there been?

On the 21st of November 2021, 72 local vigils were held around the country. It’s estimated that around 12,000 people came out to support the demonstrations.

On the 13th of March 2022 a gathering in Parliament Square was held. Fewer people attended but the support was still strong. Years of underfunding and poor staffing have taken it’s toll. People are absolutely exhausted.

But on a more positive note, Maddie adds, “the sun is coming up now and we’re getting the feeling that people have got some renewed figure for the fight.”

We do feel like we’re beginning to raise and increase awareness. Our cause is to get the government to understand that we if don’t do something about this urgently, maternity care could literally fall apart.

What can we do?

“We just need to keep on raising awareness and really understand that we all have a part to play. It can feel difficult when there’s such an enormous problem and individuals can feel powerless.

I think the message that I’m always trying to push is that together, we are strong.”