Becoming an antenatal class teacher with The Real Birth Company means that you’ll be part of one of the most important positive influences on the birth outcomes of the parents that you support. And if you’re looking for antenatal classes for yourself, this could be the data that you need to read to reassure you that great quality antenatal teaching can help you to have a great birth.

The Real Birth Company’s stats for 2020 are here – and they’re fabulous. Let’s take a look. We’ve also taken the birth infographics of some hospitals, totally at random and with their permission, to compare with our own outcomes.

The information that we have collated has been gathered from women who have consented to completing an anonymised post birth data collection questionnaire.

With this information, we are able to understand more about the effectiveness of The Real Birth Workshop.

While these hospital’s infographics are for a month rather than a year, their data doesn’t tend to change significantly over the year and so a month of data is a reasonable comparison to the year of The Real Birth Company’s data. 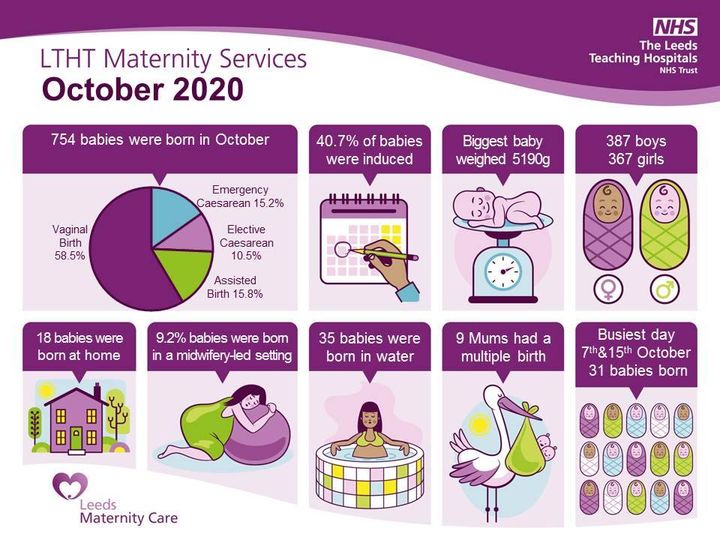 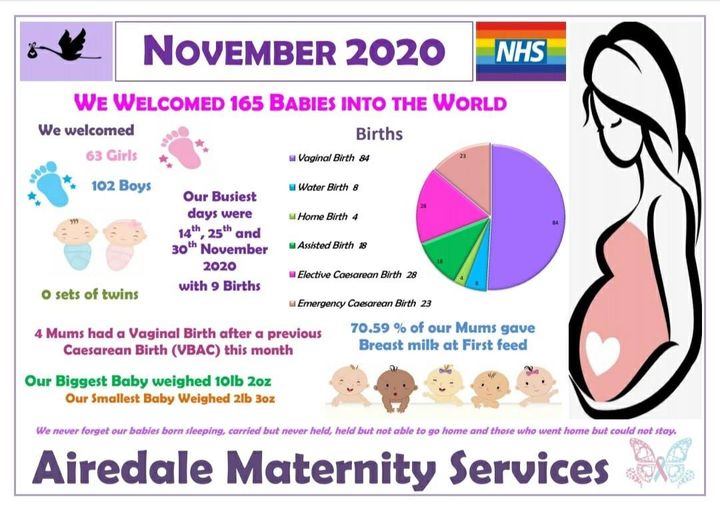 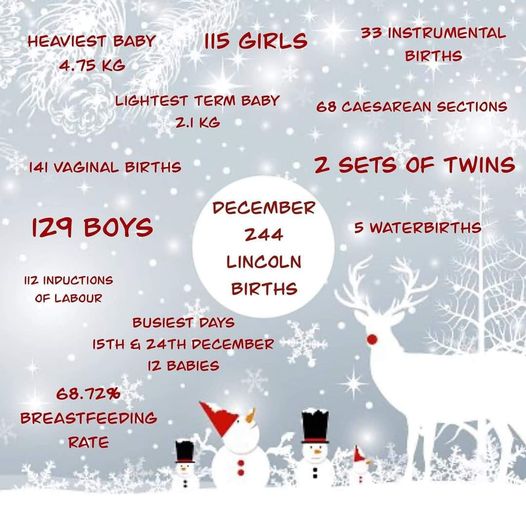 Place of birth matters. If the pregnant women or person or their baby doesn’t need medical care that is only available in hospital, we know that planning to birth at home or in a midwife led unit rather than hospital leads to better outcomes for most people and babies 4. 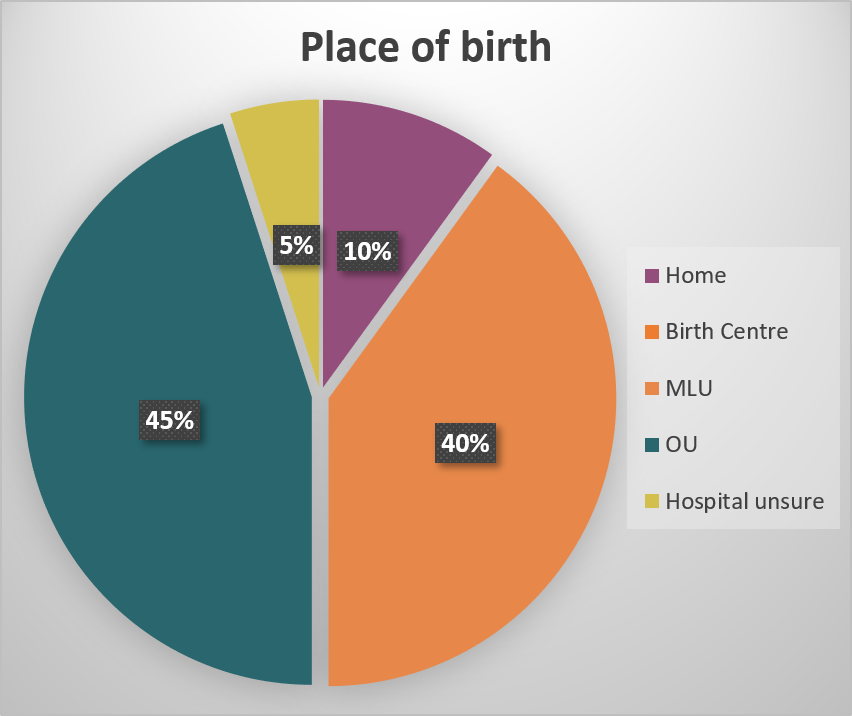 We found that for those women or people who did their antenatal course with a Real Birth Teacher and/or used the Real Birth Workshop Online, a massive 50% gave birth outside the obstetric unit! Of these, 10% had a home birth, and 40% birthed in a midwife led unit.

If we compare that to the information we have from the hospital infographics:

It is worth making one note of caution on this data, which is that during the year of Covid many hospitals temporarily closed their home birth services for periods of time, so this may account for the lower number in Airedale, and no reported homebirths in Lincoln. Having said that, national rates in 2019 stood at an average of just 2.1% across England and Wales3, with similar figures going back over the previous decade, so The Real Birth Company’s 10% home birth rate is quite astonishing.

Every birthing woman or person should have access to the pain relief that is right for them. This includes non-pharmaceutical pain relief such as water, which is safe and effective and can be stopped at any time, unlike opiate injections and epidurals.  Unfortunately, many women and people are told that they are ‘not allowed’ to have water births, even though there is often not a supportable reason for this. AIMS has some useful articles on supporting people to have a water birth if they have a high BMI or are having their labour induced.

Other forms of pain relief such as breathing techniques5 and TENS machines can really help women and people to manage their labour without the need for drugs, which in turn means that fewer women and their babies will suffer the potential side effects of these drugs.

Having information on all of the pros and cons of each type of pain management option is a key part of The Real Birth Programme’s antenatal teaching, so to, is teaching women and their birth partners how to support birth physiology dependant on whether they are choosing pain management analgesia in birth. Then considering various methods of support depending on the on the type of analgesia that they may be choosing. There is never any judgement on a woman’s personal choice over her decision on how to manage her own labour. It is so important to know what the benefits and risks are, so that women and people can make an informed decision for themselves.

The Real Birth Company teaches various types of labour breathing techniques which alone can mean that the need for additional pain relief is less likely, and these techniques can also be valuable alongside other pain relief options, including drugs.

Of those people who attended Real Birth Company antenatal classes:

That means that more than 50% of people who attended Real Birth Company antenatal classes managed their labour without pharmaceutical pain relief. Most of the rest used Entonox (gas and air) – which has with fewer side effects for women and babies than opiates or epidurals.

We have not found any breakdown of pain relief other than water that is shared on hospital infographics (if you do see any anywhere, please send them to us!). However, water birth figures are shared: 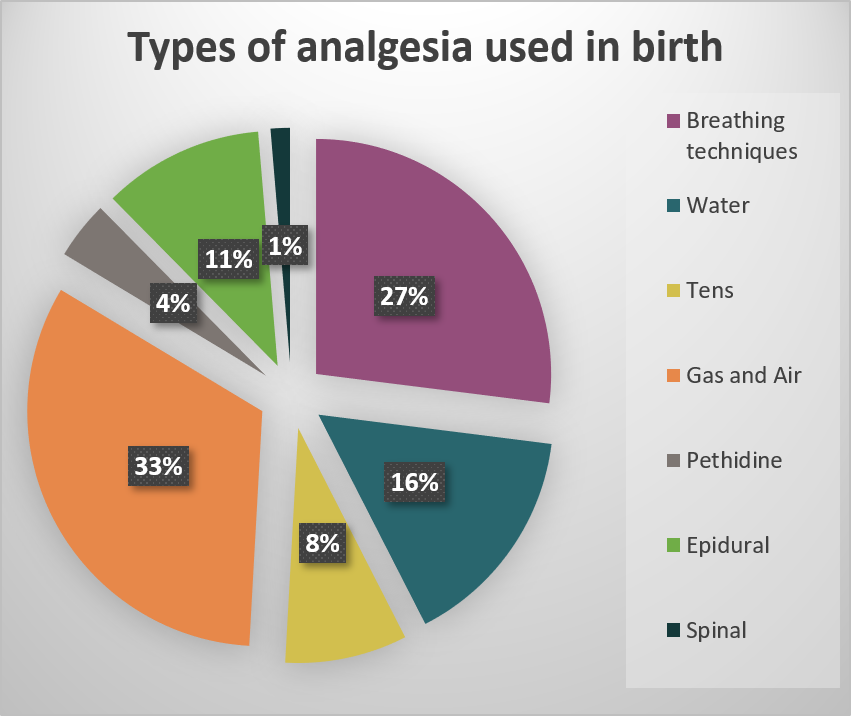 While most pregnant women and people prefer to give birth vaginally, for some a caesarean is the right decision for them. Having a safe and supportive space to discuss these options is one of the aspects of The Real Birth Company’s antenatal teaching that many people really appreciate. Birth planning is an essential part of our course (its almost all of it!)

Included in our Programme is a session on planning a caesarean or assisted birth. This is important as the World Health Organisation suggest that in 10% of births, a caesarean birth is effective in reducing mortality and morbidity, yet above that rate, caesarean birth is not associated with a reduction, in either case. 1, 6

It’s important to have the opportunity to discuss what might happen if a caesarean birth is offered during labour. These births are usually referred to as an ‘emergency caesarean’, although this can often make them sound more dramatic than they are in many cases.

While some caesareans really are emergencies (3.8%) 2, many are not of the type where the baby needs to be born within a very short time. We therefore tend to refer to caesareans which happen after labour has started as ‘unplanned caesareans’.

A planned caesarean is one which happens before labour, and is more commonly known as an ‘elective caesarean’. Some women and people don’t feel that there was anything elective about their caesarean, but that they were given no option, for instance if their baby was breach. For others, this is a positive choice and the right decision for them.

Any conversation about reducing the caesarean rate must happen with the women and people who want to have a caesarean birth at the centre of the discussion, ensuring that this option is fully supported for them. It is also essential to balance the risks of waiting too long in a labour before offering a caesarean or instrumental birth (known as “too little, too late”) with the risks of iatrogenic, or medically caused harm, by intervening too soon (“too much, too soon”). This balance is always a challenge, but it is reasonable to assume that it is not the case that over 30% of women and people could not give birth vaginally. 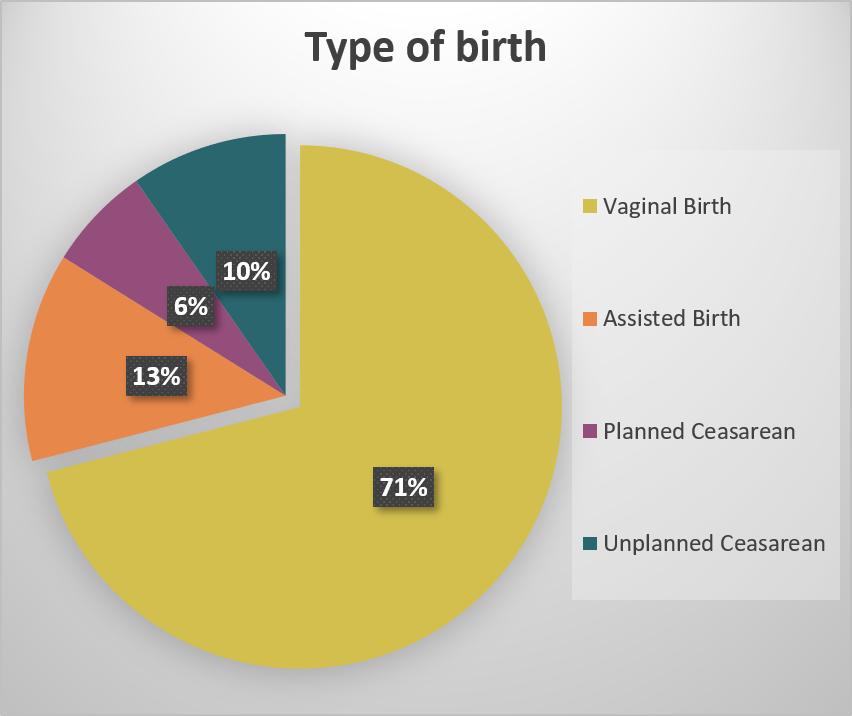 Women and people who attended antenatal classes at The Real Birth Company had the following birth outcomes:

If we compare this to nationally available information, such like the data from other trusts :

The Real Birth Company has collected data from women and people who attend its antenatal classes which show the position that they were in when they gave birth. Unfortunately, we haven’t found any info graph data from hospitals to compare with this. Anecdotally we do know that a very high proportion of women and people give birth on their back in UK hospitals, despite the problems that this can lead to. 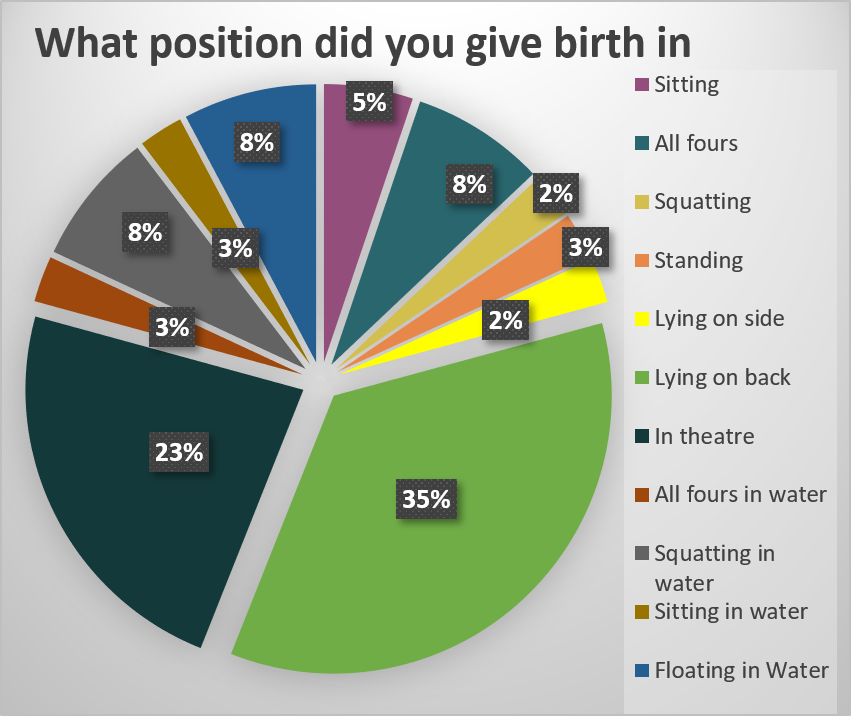 42% of women and people who have taken antenatal classes with The Real Birth Company had births where they were not on their backs. The fact that over half of our course attendees still birthed on their backs shows how strongly embedded this concept is in our birth culture. However, at least 42% of women birthing off their back is a massive shift away from the norm. It is possible that this may account in part for the fact that our class attendees are less likely to have an instrumental birth or caesarean compared to the hospitals that we’ve looked at.

Squatting in water (8%), floating in water (8%) and on all fours on land (8%) were the three most common choices of birth position. All of these positions are wonderful for supporting the structure of the pelvis in labour, and allowing the baby to move through the birth canal more easily.

This data shows that learning about the benefits of different birth positions leads to more women and people choosing to stay off their backs and choose more upright or forward leaning positions. It also shows that there is still more work to be done in hospitals to ensure that women are not encouraged to “pop up on the bed”. 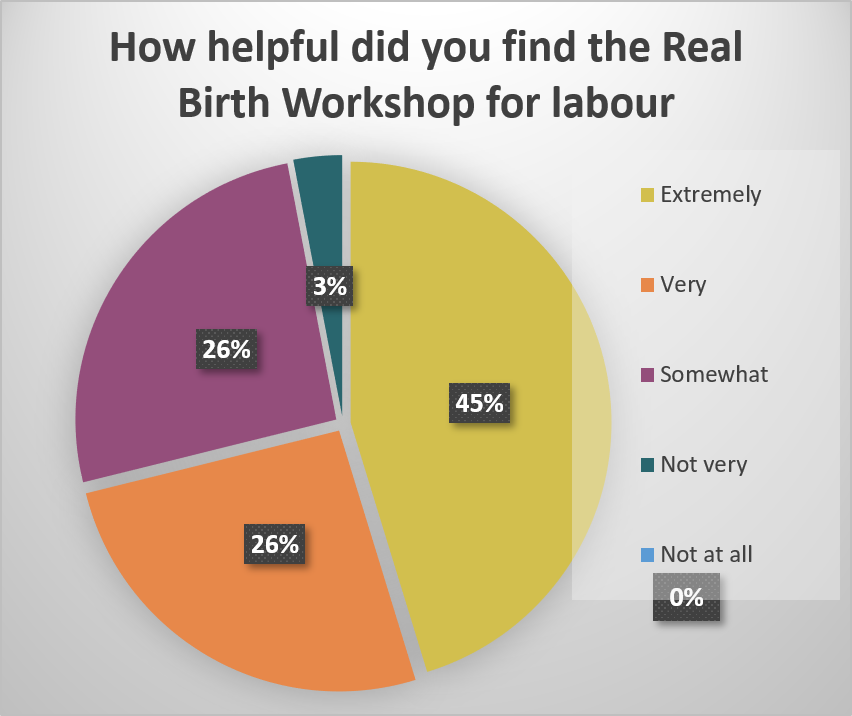 Value of The Real Birth Company antenatal classes to attendees

A massive 71% of women and their families who have attended The Real Birth Company’s antenatal classes said that they were “extremely” or “very” helpful. Again, we can’t compare this to the hospitals’ data currently as they haven’t shared it in the info graph.

We are delighted and proud to be able to present these data, which clearly shows that people who join The Real Birth Company antenatal classes are more likely to have a straightforward vaginal birth, less likely to have an unwanted caesarean or instrumental birth, and less likely to use pain relief which could cause adverse side effects for them or their baby. We are also delighted with the excellent feedback on how helpful people found our courses. Their voices are the ones that matter, so we’ll round off this article which some of their feedback to us.

“Helped me stay in control during contractions and allowed myself and my partner to make informed decisions.”

“Understanding the physiology & biomechanics of birth meant I understood what I needed to do (breath, eat, keep calm / relaxed, safe environment and upright position) to give me the best chance possible of a calm natural birth.”

“Knowledge into labour really helped me choose a perfect birth for me, even though it had to be a planned c section I was able to have the birth I wanted.”